The Sardinia Film Festival opens its doors to other events that pursue the aim of a common cultural project. During the 14th edition of the International Film Award organized by the Cineclub Sassari, the representatives of Skepto – especially the organizer Sergio Stagno – were welcomed in Alghero. It has been an opportunity for a confrontation and mutual growth.

“I’m very happy to be here – said Stagno – I spent several days and saw a selection of magnificent shorts. The ambience is wonderful and friendly, very similar to what we try to convey with the Skepto. This is perhaps one of the aspects that unites us. A way to be together and to share and above all, to look for moments of encounter between artists, public and staff. This relationship must continue to lead to even stronger relationships. Together we count more on a national and European level and this can only be good for Sardinian cinema”.

During the meeting with the president of the SFF, Angelo Tantaro, and the project manager Marta Manconi, a common strategy was considered a priority to enhance the training of the public, to which they intend to provide, through art, useful tools for an understanding of contemporary society.

Hosting other festivals for The Sardinia Film Festival is now a consolidated tradition. This year there had already been a meeting with ValdarnoCinema and its organizational director Silvio Del Riccio, while last year at Palazzo di Città was received the writer Marcello Fois, who was awarded the Medal of representation of the presidency of the Senate for the literary festival L’Isola delle storie di Gavoi. 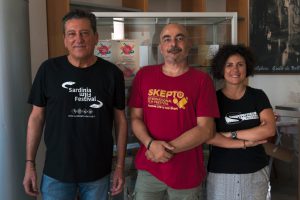