The Villanova Monteleone Awards goes to “My Tyson” by Claudio Casale

The Villanova Monteleone Award for the Best Italian documentary of the Sardinia Film Festival went to the short film “My Tyson” by the director Claudio Casale. It is a story that gives hope and redemption in a very delicate moment of the reception process of the other.

The jury motivated its choice explaining that the film was able to “compare two fates and two generations, those of a mother and a son, with a dramatic power, also thanks to a cured and elegant film grammar”.

The documentary tells the story of Alaoma Tyson, boxer of Nigerian origins and Italian boxing champion of the Youth weightlifting. His mother Patience tells the story of the family, from the migratory journey to the economic difficulties encountered in Italy.

The award was presented on 30 June in Piazza Piero Arru by the mayor Quirico Meloni, together with the presenter Rachele Falchi, the artistic director Carlo Dessì and the jurors Gianfranco Pannone, very active film director and teacher of documentary direction at the DAMS ‘Roma Tre University and the Experimental Center of Cinematography, and Antonietta De Lillo, one of the most titled directors in Italy. 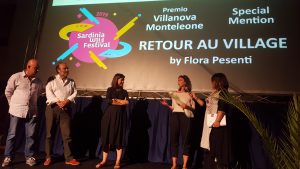 The technical commission also gave a special mention to “Retour au village” a film by Flora Pesenti, because it was able to tackle the important issue of the depopulation in rural countries: a problem that concerns not only Corsica and Sardinia, but the whole of Europe.