In the Catalan town will take place the final stage of the Film Award organized by Cineclub Sassari.

After Sassari, Villanova Monteleone and Bosa, the international track of the Sardinia Film Festival moves to Alghero for its final stage. From 3 to 7 July, the yard of Lo Quarter – in the heart of the enchanting historic center- will host the screenings of the short films in competition for the fiction and the international documentary section. It will be a really interesting comparison – given the strong increase in works from developing countries – which – not by chance – show a particular attention to the status of women, human rights and work.

Much awaited is the focus “Sardinia Animation Net“, a space dedicated to the training and in-depth analysis about animation cinema, which will encourage the encounter between filmmakers, animators and producers. The Sardinia Film Festival is the only one in the island to dedicate two days of screenings to the theme, plus two training sessions with some internationally renowned stars. 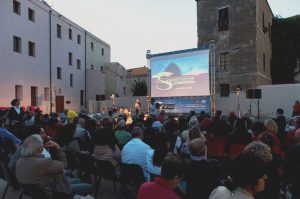 The first step will be the masterclass “Brief history of animated cinema” by the journalist and writer Luca Raffaelli (3rd July). We will continue with the panel “Animation cinema from idea to distribution” (4th July) held by Cristian Jezdic, vice president of Cartoon Italy, Pedro Citaristi, sales manager of Superights and Lucia Geraldine Scott of Red Monk Studio, who will address the theme of the Film industry.

The second masterclass about the “World of production in Italy” will be on the 5th of July, edited by Giannandrea Pecorelli, television director and film producer, already responsible for the productions and co-productions for RCS FILM & TV, Head of Unit of RAI Fiction, manager of Sony International, manager of Endemol, of which he has also been the executive producer. “Don Matteo”, “Un Medico in famiglia” and “Notte prima degli esami” are some of his best known works.

Both Raffaelli and Pecorelli are part of the juries of animation, fiction and documentaries composed by industry experts, critics and directors.