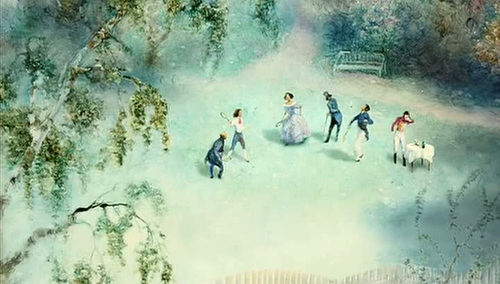 Aleksandr Petrov is a Russian filmmaker and animator. He received an Oscar for “The old man and the sea”(1999), he’s one of the best Russian and international animation masters. He studied art at VGIK (state institute of cinema and TV) and he was a disciple of Yuri Norstein, from whom he learned the pastel oil paintings on glass technique, which he uses to create extraordinary and unique animations. By using his fingertips instead of a paintbrush on different glass sheets positioned on multiple levels, each covered with slow-drying oil paints, he’s able to add depth to his paintings.

The result of this long and loborious work is a sort of “painted narration”, which originates from Romantic realism and which can be really moving. It took Petrov 3 years to paint each of the over 29.000 frames of “The old man and the sea”.

“Mermaid” (1997, Rusalka In Russian) is another of his paintings/shortfilms. It’s from a Pushkin’s tale and it’s based on Slavic agricultural folklore. The big chromatic variety recalls absolutely positive emotions and suggestions.

The masterclass is planned tomorrow, 4th July at 5,00 pm at Lo Quarter’s conference hall in Alghero. Entry is free but limited.

Reserve your seat at this unique event sending an email to info@sardiniafilmfestival.it with your name, surname, telephone number and attach a copy of your identity document.