All the winners of the Sardinia Film Festival 2019

The overall winner of the Sardinia Film Festival, best short film of the fourteenth edition, is “My Tyson” by Claudio Casale, already holder since a few days of the Villanova Monteleone Award for the Best Italian Documentary. The work tells the story of Alaoma Tyson, a boxer of Nigerian origin who became the Italian boxing champion in the Youth category. His mother Patience is the narrator of their family history: the migratory journey and the difficulties encountered. As Casale said, the woman was the victim of a terrible legal case, unjustly sentenced to six years in prison and then acquitted. 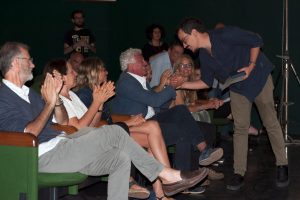 The young Roman director received the Medal of the Presidency of the Italian Republic, given by Angelo Tantaro, the president of the festival. On the stage together with him, there were the presenter Rachele Falchi and the project manager Marta Manconi. Casale, which in Villanova Monteleone had dedicated the victory to the “captain” Carola Rackete, now has dedicated this further success to the two protagonists of his film. 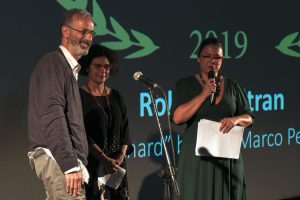 “Forza Dinamo! I’m Venetian, but I did cheer for this team”. It is almost a dedication to the giants of Pozzecco done by the actor Roberto Citran, awarded with a special mention on the stage of the Cinema Miramare in Alghero, for his interpretation in the short film “Mon clochard”, by Gian Marco Pezzoli. It is the story of a frustrated teacher whose habits are upset by the arrival of a mysterious tramp.
The artist received the recognition from the producer Giannandrea Pecorelli, a member of the prestigious international jury also formed by the director of the SIAE cultural promotion office, Danila Alda Confalonieri and the Moroccan journalist Abdelkarim Oakrim. 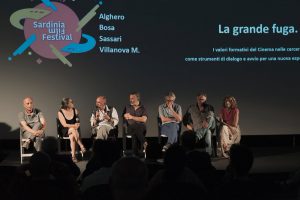 The actors Marit Nissen and Paolo Sassanelli also took the stage. Sassanelli has spoken about his last project “La grande fuga“, a volunteer experience to bring the cinema inside the prisons. An experience that Regina Coeli would like to replicate in prisons throughout Italy, and among these in the structure of Bancali (Sassari). During the meeting, moderated by the Neapolitan journalist Alberto Castellano, together with Sassanelli, took part in the meeting also Mario Dossoni, guarantor of the rights of the detained persons and coordinator of the “restricted juries”; Lia Camboni, volunteer of the Bancali prison (SS) for the women’s section; Vittorio and Alessandro Gazale, who presented the project “Dalle carte alle storie liberate“, projecting the video clip of the homonymous piece by Piero Marras.
The Cineclub Sassari has been involved since many years in the detention centre of Bancali within the Sardinia Film festival, organizing a real “Restricted Jury” Award for the women’s and men’s sections. 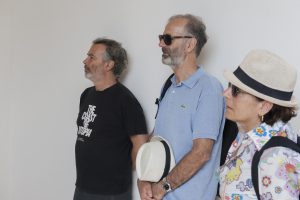 In recent days, the authors and guests also visited the former penal colony of Tramariglio, during a location scouting organized by the Sardinia Film Commission Foundation, which led them to discover the wonderful territory of Alghero and also the culture and the local gastronomy.

“The Sardinia Film Festival is increasingly confirmed as an international event, thanks also to the collaboration of the Municipalities of Sassari, Villanova Monteleone, Alghero, Bosa and important private partners – said the artistic director Carlo Dessì –. What emerged in so many days we have spent together is the desire to communicate, under the banner of cultural exchange, tolerance and acceptance: typical values of our land that are thus the flag of democracy and interchange in the whole world».