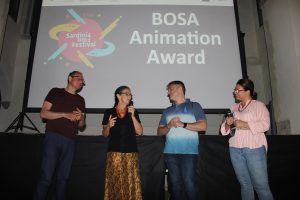 In addition, a special mention was given to the film “La Noira“, by Carlos Baena, with the following motivation: “What is fear? Is it possible to feel it as a useful emotion, which can save our lives? This spectacular film puts us on a panoramic wheel – as it is mentioned in the title – to push us to overcome the fears that block us, projecting us towards the quiet vortex of life “.
Nessun commento
Prev Next