Sardinia film festival is coming up with its 14th edition

The complete program of the International Award organized by Sassari Cineclub. The cities of Sassari, Villanova Monteleone, Bosa and Alghero will host fifteen days of events and screenings. The categories are: fiction, documentary, animation, experimental and videoart.

Fifteen days of events in four different places of North Sardinia, one hundred twenty screenings in original language and provided with subtitles, eighteen European and many Italian premieres. Two thousand works arrived in total in the competition. And yet special guests, concerts, meetings and masterclasses. This is the 14th edition of the Sardinia Film Festival, the international award organized by Sassari Cineclub dedicated to short films, which became one of the most awaited events about independent cinema in the island.

The cities of Sassari, Villanova Monteleone, Bosa and Alghero are involved in a network which includes fiction, documentary, animation, experimental and videoart. «This year we have witnessed an increase of socio- cultural films especially from developing countries– said the artistic director Carlo Dessì – They come from North Africa, Middleast, South America and Asia and they often put the spotlight on women condition, human rights and labour. This is the first edition without Nando Scanu, the oldest member and co- founder of Cineclub– added Dessì – and we will try to pay homage to the great legacy he left».

«We want to offer our audience a priviledged position to witness the different points of view and to be aware of the world around» said the president Angelo Tantaro. The festival programme has been presented today in a conference at Alghero’s Sogeal Airport, at the presence of the artistic director Carlo Dessì, the project manager Marta Manconi, the director of the Fondazione Sardegna Film Commission Nevina Satta, the film director Antonello Grimaldi, mayors and adminisrators of the cities involved, the guarantor of prisorners rights Mario Dossoni, the treatment area manager Ilenia Troffa and the gender activist Maria Francesca Fantato.

The festival will be anticipated by a two – days première which will take place on the 14th and 15th of June at the Academy of Fine Arts “Mario Sironi” in Sassari, where will be screenings dedicated to the shortmovies running for the Experimental and VideoArt section. A second première will be held on the 24th, 25th and 26th of June at Palazzo di Città and it will host the “Vetrina Italia” and “Vetrina Sardegna” segments but also numerous collateral events. Among these, the round table “Focus Donna” on the 24th in collaboration with “Noi Donne 2005” and the screenwriting masterclass that will take place on the 25th , curated by Filippo Kalomenidis.

There are also going to be some feature films première you should not miss. On the 25th there will be the screening of “ Restiamo amici” by Antonello Grimaldi, based on Bruno Burbi novel “Si può essere amici per sempre” and played by Michele Riondino, Alessandro Roja and Violante Placido.

Always on the 25th there will be the presentation of “L’ultimo pizzaiolo” by the journalist Sergio Naitza, a work focusing on the shutdown of cinema theatres in Sardinia.

“Altura” by Mario Sequi is the first Sardinian movie to be produced postwar (1949). It will be available for the public after a long restauration work. The movie is played by Massimo Girotti, Eleonora Rossi Drago and Roldano Lupi, with the music composed by Ennio Porrino. The film was salvaged by “Gremio dei sardi a Roma”, thanks to Franca Farina of the “ Centro sperimentale di cinematografia, Cineteca Nazionale” who found it in a private collection.

The official start date of the festival will actually be the 28th of June and it will take place in Villanova Monteleone, with a three days event for the “Best Italian Documentary award”.

The Neoneli choir will open the event as special guest of the evening with a tenor performance accompanied by Orlando and Eliseo Mascia “launeddas”, followed by a national première of “Radici” by Luigi Monardo Faccini, based on a concept of Marina Piperno. It will be set up a stage for the screenings in “Piazza Piero Arru”, while the other events will take place in “Su Palatu” , where Gennaro Aquino will host a workshop on the 29th and 30th of June about the role of the location manager in cinema.

The award cerimony for the 7th Villanova Monteleone Award will be on the 30th of June.

From the 1st of July, for two days, the beautiful village on the Temo river will be the setting for the 5th “Bosa Animation Award” dedicated to animated shortmovies from every part of the world. The ex Carmine convent will be used as screening location. The first day, the Conference Hall will host us for the first part of “Comics reading and writing lab- for children and teenagers” by “Centro Internazionale del Fumetto” directed by Bepi Vigna and which will continue the next day with the second part. The guest star of the 2nd of July is Luca Raffaelli who will present his new book “Le anime disegnate”. The winners of the animation section will be announced the evening of the same day.

The “Sardinia Animation Net” is already highly anticipated: a space dedicated to the formation and analysis of animated cinema and which also promote a meeting between filmakers, animators and producers. It will be a unique event in the island, with two dedicated days, plus two formation days. First up is the “Brief story of animation cinema” masterclass, held by the writer and journalist Luca Raffaelli (July the 3rd) . To follow, the panel “Animated cinema, from concept to distribution” (July the 4th) curated by Cristian Jezdic, Cartoon Italia VP, Pedro Citaristi, the sales manager for Superights and Lucia Geraldine Scott, Red Monk Studio, who will talk about the industry themes.

A second masterclass on “The production scene in Italy” will be held on the 5th of July by Giannandrea Pecorelli, television executive and film producer, manager of productions and co-productions for RCS FILM & TV, RAI Fiction, SONY International and Endemol of which he was also executive producer. “Don Matteo”, “Un medico in famiglia” and “Notte prima degli esami” are some of his most famous works. Both Raffaelli and Pecorelli are part of the animation, fiction and documentary jury, composed by experts in the field, critics and directors.

The award cerimony, set for the evening of the 7th, will be open to the public upon reservation and subject to availability. 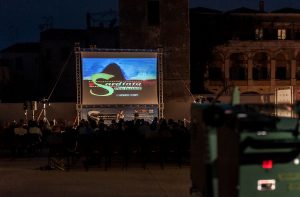