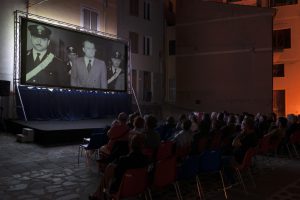 At 5,00 pm, Su Palattu ‘e sas iscolas hosted the screening of “The Harvest”, di Andrea Paco Mariani’s documusical, which tells the story of Sikh community, the lowest caste in Indian Punjab, who works in extreme exploitation conditions as farm hand next to Latina, Italy. Slick Steve & The Gangsters’s music accompanied the narration.

To follow, the audience could watch the film “Oltre il confine, La storia di Ettore Castiglioni” by Federico Massa and Andrea Azzetti, which talks about the last months of the great alpinist Ettore Castiglioni’s life between Italy and Switzerland.

At 9,00 pm, the public moved to Piazza Piero Arru to watch the last 2 screenings of the night.

Daniele Ceccarini, Mario Molinari and Paola Settimini’s “Il nome del padre” tells the redemption of Udo Surer, who was the son of a “death squad” Nazi official, who was known for the ferocious massacres made in Vinca and San Terenzo. The film was followed with the public and Cecilia Mangini’s great applause. Mangini also underlined that works like this should be screened in schools.

Andrea Arena’s “Taming winter. A story of Carnivals and bears” closed this 2nd night of the festival with the anthropological storytelling of the old practises which are linked to the main figures of Sardinian, Piedmontese, Austrian and Finnish Carnival.

The Documentary Festival continues tonight with the last shortfilms in competition: at 5,00 pm will be at Su Palattu ‘e sas iscolas, and at 9,00 pm in piazza Piero Arru with the special screening of Cecilia Mangini‘s “Ring Sardegna”and last doc in competition “Cinema Grattacielo”.

Starting from tomorrow, SFF will move to Alghero, then to Bosa, Stintino and Sassari, the all the awards of this 13th edition will be assigned. There will be two important prizes: the Unipol Sai Award to the best international fiction and SIAE- SILLUMINA Award to the best Italian under 35 author.