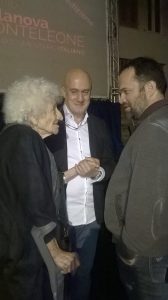 The extraordinary testimonial of this edition is Cecilia Mangini. She’s the first woman to be a documentarist filmmaker in Italy who collaborated with the movie critic Lino Del Fra (her husband) and with one of the most important icons of Italian cinema del reale, Pier Paolo Pasolini.

At the beginning of her career, Cecilia Mangini started to tell the hard socio-political reality by using photos and films. It wasn’t easy at all for her to integrate into that exclusively male professional environment. She recently affirmed: “In a all-men professional world, I adapted myself so much that I started to behave like a man“.

Her last work after over 40 years of absence from cinema is “In viaggio con Cecilia”. It’s set in Taranto and talks about the popular fight and mobilitation against pollution which is the product of the local iron and steel industry.

During the event, another main guest was the director Francesco Cordio, who introduced the first short film in competition “Roma golpe capitale”. It talks about background of ex-Rome-mayor Ignazio Marino’s political history through the interviews with such well-known personalities as the ex-Rome-assessor Caudo, the journalist Federica Angeli and the ex-antimafia-prosecutor Gian Carlo Caselli.

This work received a big round of applause from the audience and Cecilia Mangini said she particularly appreciated it. She also underlined the importance of carrying this kind of political documentaries forward.

This Sunday, the festival is moving to Alghero, Bosa, Stintino and Sassari, where all the awards of this 13th edition will be assigned. There are two important prizes: the Unipol Sai Award to the best international fiction and SIAE- SILLUMINA Award to the best Italian under 35 author.