Great emotion during the last evening of the Sardinia Film Festival in Sassari.

Nando Scanu, born in 1934, was the founder of the Cineclub Sassari in 1951. He has continued his life-long commitment to the cultural cinematographic volunteering, remaining until the end one of the greatest supporters and collaborators of Diari di Cineclub. In memory of this extraordinary cultural animator who passed away the last November, it was given the medal representing the Senate Presidency connected to the Sardinia Film Festival.

On June 26, at Palazzo di Città, the important recognition was given to the widow Angela, who was there together with her five children: Carla, Silvana, Sabrina, Beppe and Proto. It was a moment of strong emotion which involved the whole theater.

The medal has been conferred by President of the Festival, Angelo Tantaro, flanked by the artistic director Carlo Dessì. 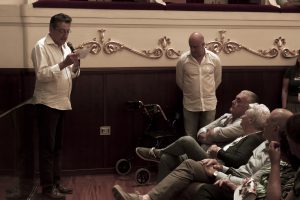 In the citation for the Award, Nando Scanu has been remembered “For his moral and civil commitment which has contributed to enhancing the educational values of the Cinema, as a tool for dialogue and social promotion. To his memory and to the legacy of 67 years of uninterrupted cultural activity, which he has always carried out with that necessary lightness and a smile on his lips, an example that we would like to pursue”.

The ceremony was preceded by the screening of Speciale Cineclub Sassari “Ricordando Nando”, a documentary film made in the early 2000s by Rosanna Castangia for the fiftieth anniversary of the Cineclub Sassari. Along with Nando Scanu, have been remembered other pioneers of the cinema in Sassari, such as Bruno Ricci and Silvio Bredo, then Pinuccio Fara and Benito Castangia, who had formed the first core of the Cineclub.

A great number of people attended the event presented by Rachele falchi.